Joar Nango is being honored with the KURT SCHWITTERS PRIZE 2024 OF THE NIEDERSÄCHSISCHE SPARKASSENSTIFTUNG. The prize is being awarded for the fourteenth time. It is endowed with 30,000 euros and includes an exhibition at the Sprengel Museum Hannover.

Joar Nango, born in 1979 in Áltá, Norway, is a Sámi artist and architect. The Sámi are the indigenous inhabitants of Sápmi, a cultural space which extends over Norway, Sweden, Finland, and part of the Kola peninsula in Russia. In his installations, Joar Nango addresses issues of indigenous identity and investigates the borders between architecture, design, and the visual arts.
He is a founding member of the architectural collective FFB. His works have been shown at numerous international exhibitions, including the documenta 14 in Kassel and Athens in 2017 as well as the Chicago Architecture Biennial in 2019; they were likewise on display at the National Gallery of Canada in 2020 and at the newly opened Nationalmuseum Oslo in 2022.

Tone Hansen, director of the Munch Museums in Oslo, explains as a representative of the international jury the reasons for the selection: “Joar Nango is an internationally recognized architect and artist. Through a post-punk, DYI aesthetic and an interventional site-specific strategy, Joar Nango examines junctures between indigenous and contemporary architecture as well as traditional Sámi life forms, bringing to light the typology of a sparsely researched indigenous architecture and duodji handicraft tradition. His installation-based exhibitions merge mobile architecture and found materials so as to become a temporary common ground for being together. His research-based methods have resulted in a virtual archive of Sámi architecture (https://gumpi.space/en), as well as in a traveling library structure presenting books, manuscripts, documents, and ephemeral objects related to his investigations. The library includes literature on Sámi building customs, indigenous architecture in general, architectural theory, and postcolonial theory. Girjegumpi is a nomadic structure which changes in different situations and contexts, developing as it moves around the world.
In terms of discipline and medium, Nango defies categorization, choosing instead to mobilize the space in-between and across worlds. The jury acknowledges this strategy as resembling the one of Kurt Schwitters (1887-1948), known for his Merz movement. For Schwitters, ‘to merz’ was to abolish boundaries: between artistic disciplines, between the meaningful and the banal, between art and life. As he said himself: ‘Ideally, Merz creates connections between absolutely everything in this world.’”

Joar Nango describes his connections to Kurt Schwitters: “I am so honored to receive this award, and it means especially much to me that it given in the name of Kurt Schwitters, an artist who has been very important for me from an early age. His way of merging worlds and disciplines, reality and absurdity, has served as a guiding light for me since I was a student. In fact, as a first year art student I developed a performance piece in relation to his well-known Ursonate piece from 1932; and as a young teenager I used to spend my summers working at the museum where his small stone hut is placed outside, near the west coast of Norway in my hometown Molde. So telling the tale of Kurt Schwitters’ years on this island during World War II was part of an everyday routine I had as a young boy working in that museum. This was years before I made my way to become an artist.”

Kurt Schwitters visited Norway several times and spent summers with his family at Hjertøya outside of Molde, on the west coast of Norway, where he created a Merzbau in a potato cellar, as well as on Lysaker outside of Oslo, where he lived with his son Ernst Schwitters when in exile.

The KURT SCHWITTERS PRIZE 2024 OF THE NIEDERSÄCHSISCHE SPARKASSENSTIFTUNG is expected to be awarded in the autumn of 2024. Dr. Johannes Janssen, director of the Niedersächsische Sparkassenstiftung, states: “With its choice of Joar Nango, the jury has selected an extraordinary artist and worthy award recipient who already included the oeuvre of Kurt Schwitters early in his artistic thought and production.”

The awarding of the prize is connected with an extensive solo exhibition of the artist at the Sprengel Museum Hannover.

The KURT SCHWITTERS PRIZE endeavors to honor artists “whose oeuvre is characterized by a creative response to Kurt Schwitters and is distinguished by a daring advance into new areas of artistic composition and artistic concepts, or whose oeuvre contributes to the connection and integration of artistic genres.”

The Members of the Jury for the Kurt Schwitters Prize 2024:

The awarding of the KURT SCHWITTERS PRIZE is an important building block in the cultural support offered by the Niedersächsische Sparkassenstiftung, which is engaged throughout the year in supporting the visual arts, music, museums, and monument preservation. 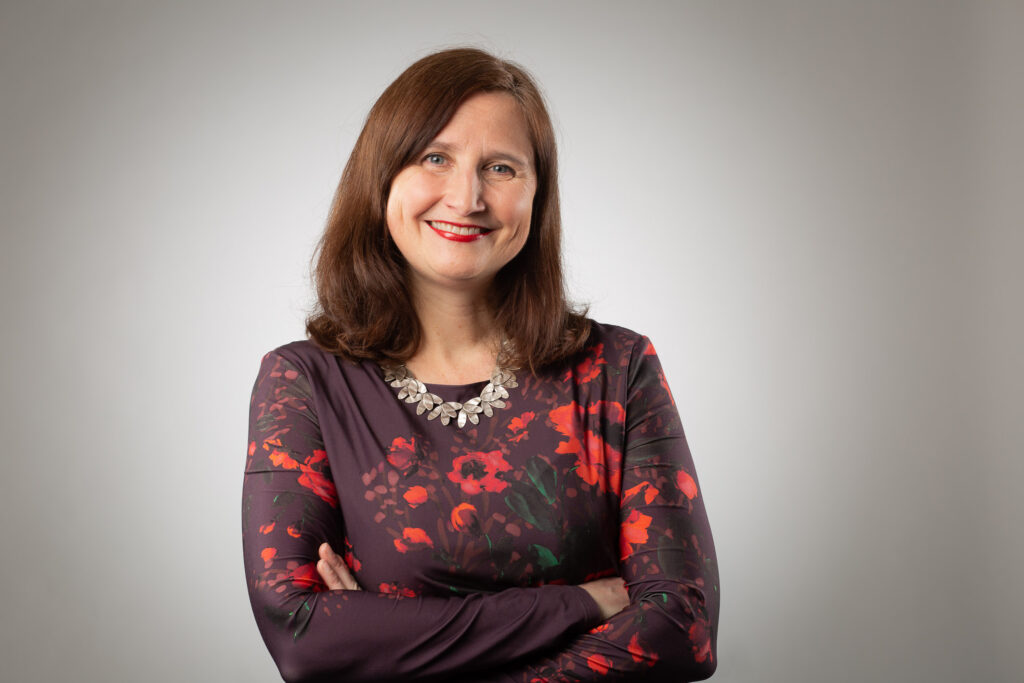 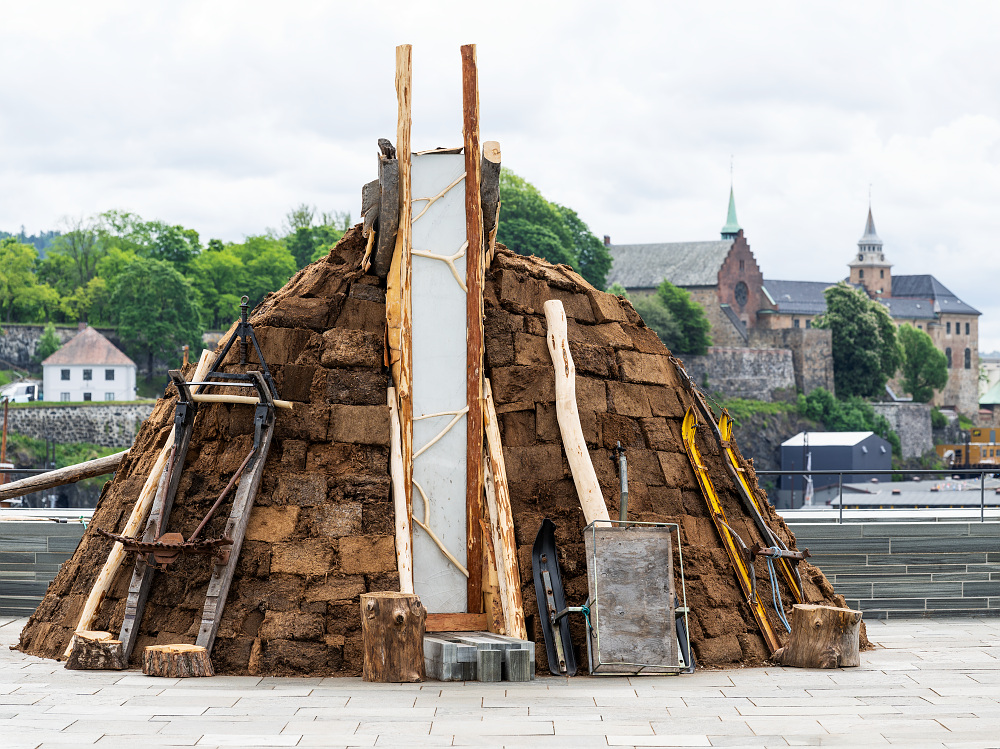 A House for all cosmologies, fotocredit: Nasjonalmuseet 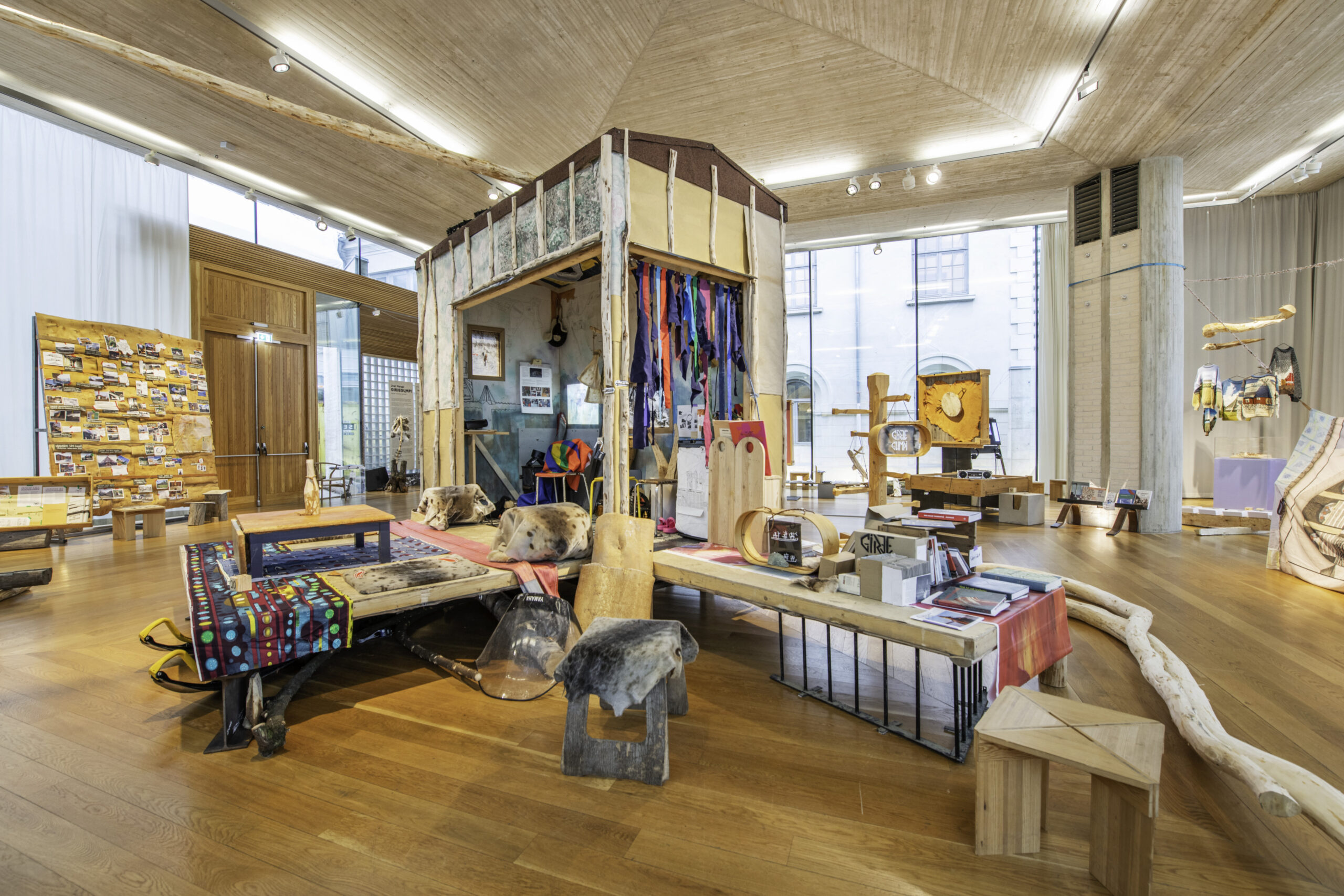 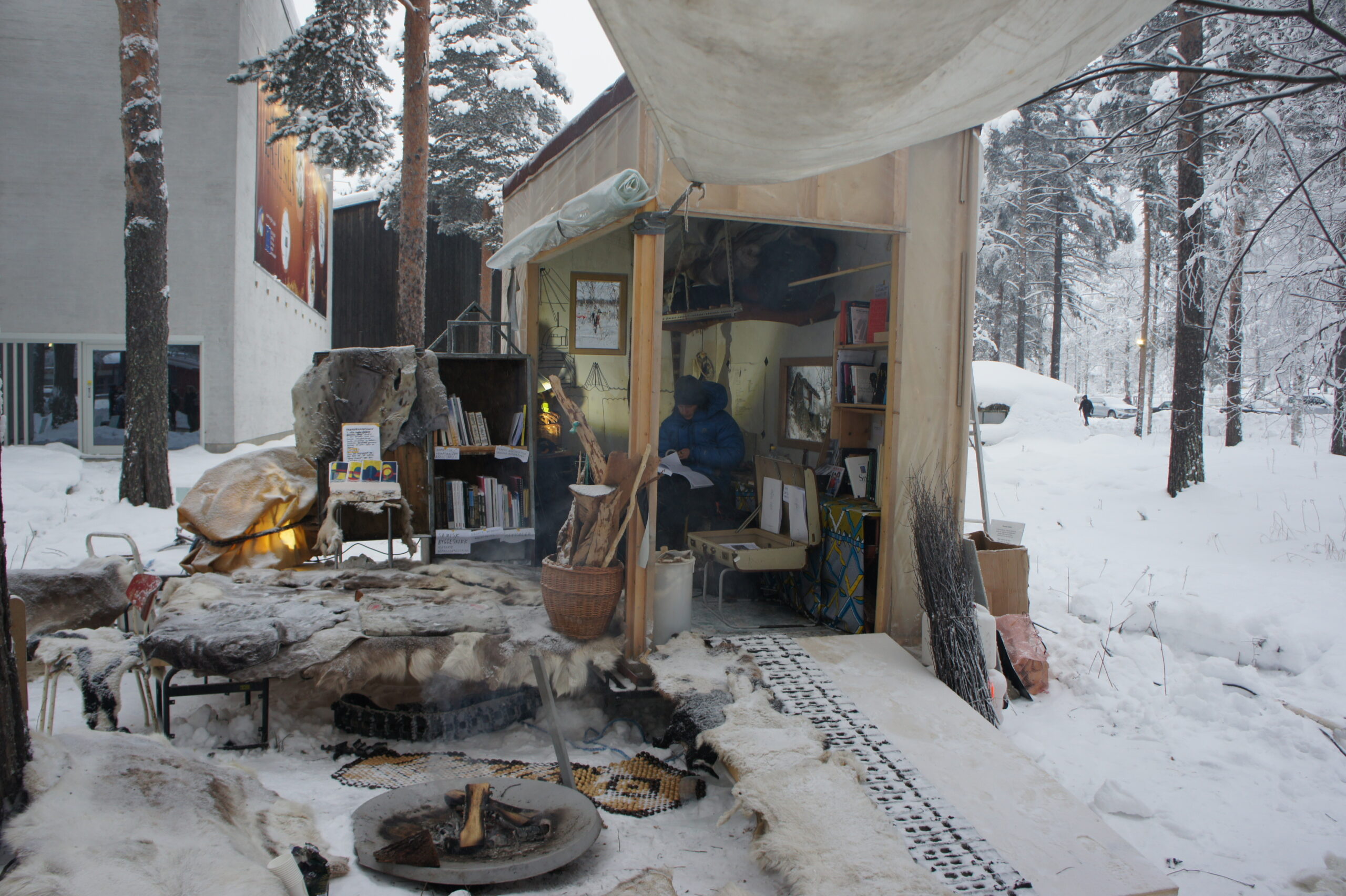 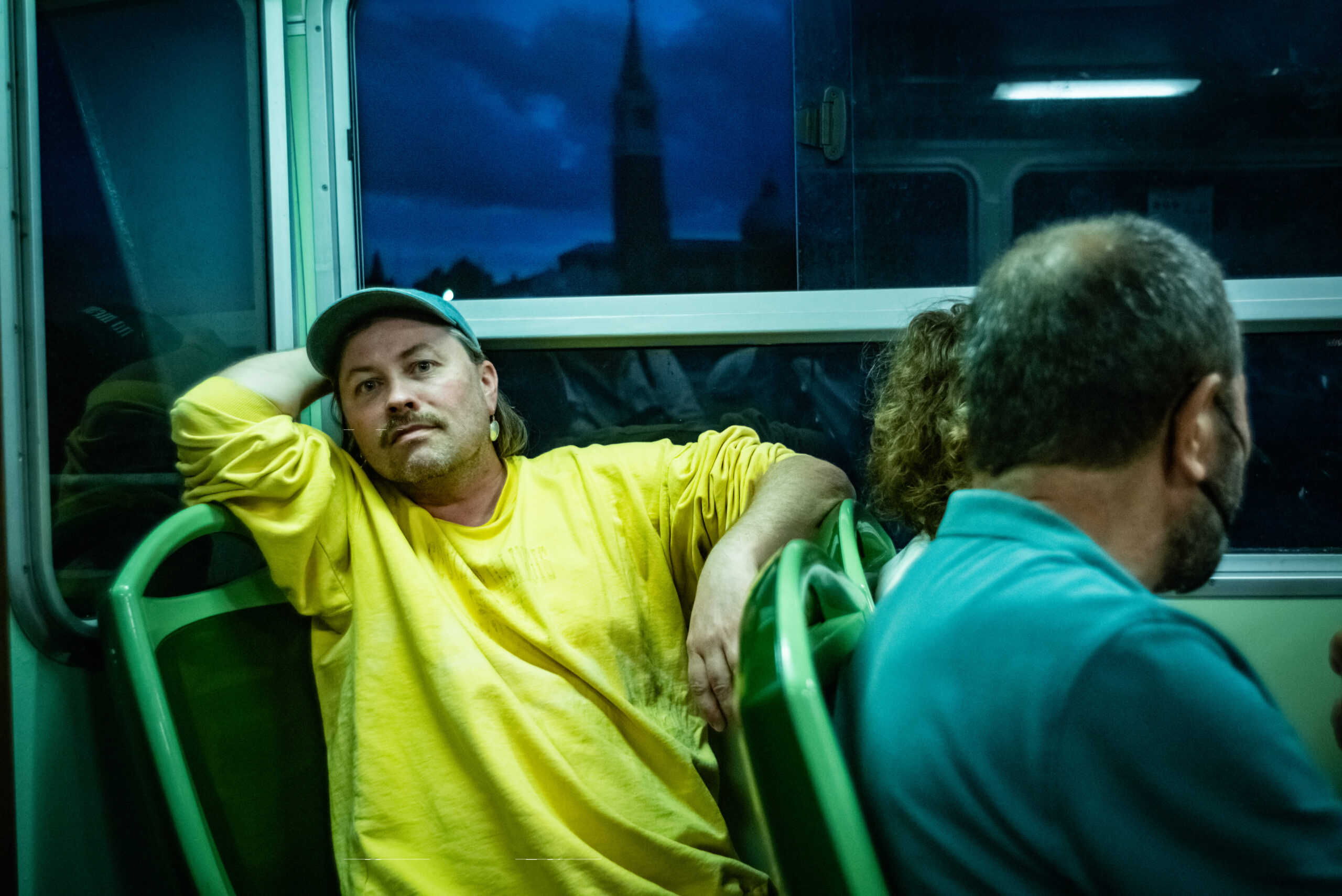